A facility with a scale of 1,100 racks will be operational next April to meet service facility expansion and colocation demand

TOKYO - February 4, 2022 - Internet Initiative Japan Inc. (TSE1: 3774), one of Japan's leading Internet access and comprehensive network solutions providers, today announced that it decided to additionally establish the second phase building at "Shiroi Data Center Campus" (Shiroi City, Chiba Prefecture; hereinafter referred to as Shiroi DCC)(*), a data center operated since May 2019. As for the construction schedule, IIJ plans to start construction in May 2022 and operation in April 2023.

The second phase building to be newly constructed will have a site area of approximately 8,000 ㎡, maximum power reception capacity of 10MW and capacity with a scale of 1,100 racks, and IIJ will expand the facility housing space for IIJ's network-related services whose demand is expanding due to the promotion of DX by domestic companies as well as meet the strong colocation demand of enterprises, cloud vendors, content providers and data center operators. In addition, IIJ intends to further improve operational efficiency by expanding the application area of automation as well as promote efforts on carbon neutrality by establishing a mega solar power generation facility on the premises.

Shiroi DCC proactively adopts the latest energy-saving technology as well as new technologies such as automation of operation using AI and robots, and started operation of the first phase building in May 2019 as a data center that can meet needs for large-scale digital data processing due to the full-fledged popularization of digital transformation (DX), AI and IoT.
Shiroi DCC is being used also as an integration base of cloud and network services provided by IIJ, and its compatibility with IIJ's services and new efforts such as energy saving and automation are highly evaluated, leading to steady increase in the number of orders for colocation and housing received from service providers and enterprises. In addition, due to the recent increase in the use of ICT by domestic companies, the use of IIJ's services and the utilization of DC as a facility to house service equipment are also increasing. Since increase in colocation demand and expansion of IIJ's service facilities are forecast to continue and the first phase building (approximately 700 racks) is expected to be fully occupied during fiscal 2022, IIJ decided to expand Shiroi DCC and construct the second phase building.

At the second phase building, IIJ will inherit and further develop the automation and energy-saving technology introduced in the first phase building and expand the application area.

Adoption of the latest energy-saving technology/equipment

An "outside-air cooling system" that reduces power consumption and "wall blowoff air-conditioning" that delivers cooled air more efficiently will be adopted for the air-conditioning equipment. IIJ will adopt a three-phase, four-wire UPS for the electrical equipment and efficiently supply 200V of electricity as well as proceed with the levelling of power demand through peak cut and peak shift of air-conditioning power by utilizing lithium-ion batteries.

Promotion of efforts on carbon neutrality

Due to the fact that it can provide direct connection with IIJ's various network service and cloud service facilities and that a base for providing JPNAP Tokyo Service, which is an internet exchange (IX) service, will be established at Shiroi DCC in March 2022, it will be able to interconnect with content businesses and internet providers in Japan and overseas. The Inzai district where Shiroi DCC is located is attracting attention as an area with a concentration of sequentially constructed data centers, and can also be used as a base for a network hub that connects to various cloud services and suburban data centers, etc. 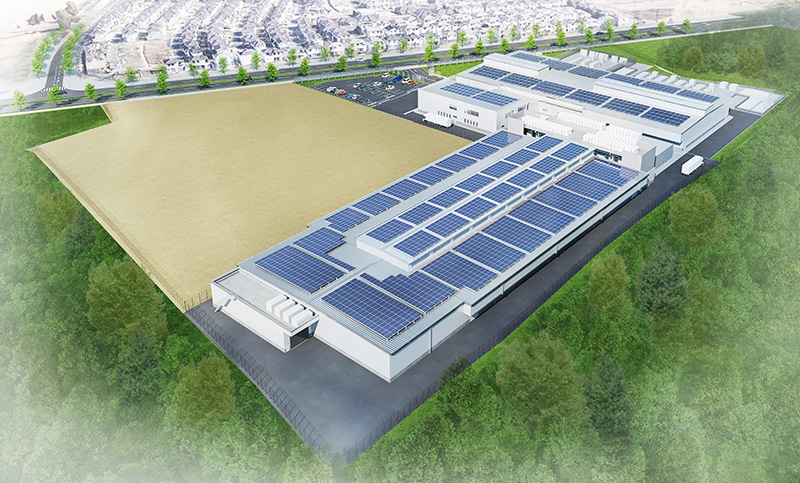