In the early 1990s, before Internet was born in Japan, the WIDE Project, an industry-academia collaboration, was engaged in R&D activities and was the leading accumulation of Internet technology. In December 1992, IIJ was founded as a pioneer of Japanese ISP by mainly engineers involved in this R&D activities with the dream of spreading Internet as a new means of communication in Japan. Soon later, IIJ developed and launched the first domestic network services, including Internet connectivity service, dialup IP service, and firewall service, and established a dominant market position in the Japanese ISP market in the mid-1990s. The number of entrants into the ISP market increased dramatically along with the spread of Internet, which resulted in intense price competition, and most ISPs subsequently went out of business.

In the midst of such a market environment, IIJ Group focused on large-scale enterprises and government agencies likely to utilize Internet for their businesses. Based on its strength of the accumulation of technological capabilities related to Internet and customer base, IIJ has strategically transformed its business model towards a comprehensive provision of highly reliable and value-added Internet-related services. IIJ expanded its business to providing security services, network operation and monitoring, and construction and operation of network and Internet-related systems, which are necessary for companies to use Internet, and established a group of subsidiaries and equity method investees. Subsequently, due to the need for providing combined network services to enterprises, IIJ started offering mobile services as an MVNO, and developed Cloud services ahead of the trend toward the convergence of networks and systems. IIJ also established bases in the United States and Europe to operate a global Internet network on its own, and have been strengthening Asian businesses with a focus on providing network and system support to mainly Japanese domestic customers for their overseas business expansion.

Through such business development, IIJ has built up a customer base mainly consisting of blue-chip enterprises and government agencies, and accumulated monthly recurring revenues that account for more than 80% of total revenues, thereby establishing brand recognition and IIJ Group's unique position in the enterprise ICT market. In recent years, the operation of integrated corporate networks and systems that incorporate Internet technologies has been gaining ground among Japanese enterprises and government agencies. IIJ believes that IIJ Group's role in supporting the Japanese Internet and contributing to the realization of a networked society through technology, as stated in its business philosophy, shall become increasingly important. 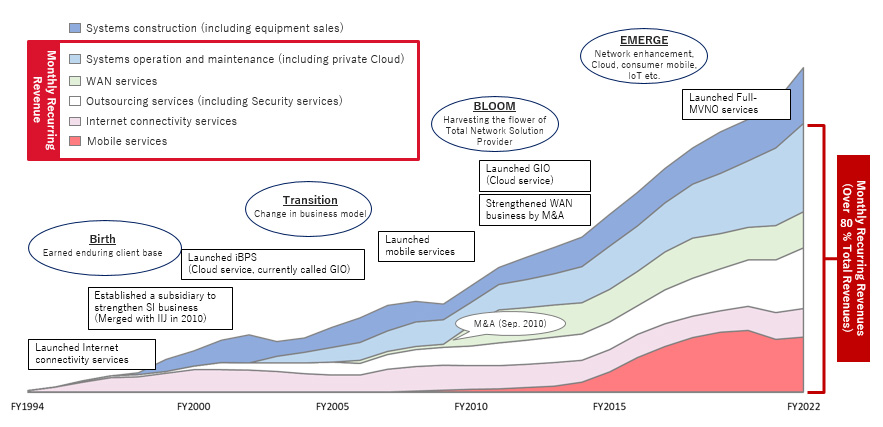