TOKYO-October 21, 2019-Internet Initiative Japan Inc. (TSE1: 3774), one of Japan's leading Internet access and comprehensive network solutions providers, today announced that the industrial lithium-ion battery storage system produced by the US firm Tesla will be deployed at the Shiroi Data Center Campus (Shiroi DCC) in Shiroi-city, Chiba Prefecture. Shiroi DCC kicked off operations on May 1 of this year, and the new Powerpack battery systems there will go online on November 1.

The installation of lithium-ion batteries providing energy management tech is advanced initiative for data centers in Japan. The Powerpack system at Shiroi DCC will enable use of energy-saving techniques such as "peak shaving" and "load shifting" for air conditioning energy used at the facility. IIJ is aiming to cut peak energy demand for the facility's air conditioning, the cost of which accounts for around 40% of the facility's total operating cost by roughly 15%.

In recent years, even greater efforts are becoming necessary to achieve a low-carbon society. As an infrastructure service provider, IIJ has been building and operating its data centers in ways that make them exceptionally environmentally friendly. Now, IIJ is working to optimize energy use efficiency at the Shiroi DCC by implementing the latest energy-saving technologies, including a highly energy-efficient outside-air cooling system, AI-controlled cooling, and more.
However, since outside-air cooling systems cannot be used during the summer, energy use peaks during the daytime in that season, meaning that leveling the load of energy demand remains an issue to be addressed. In order to solve this issue, IIJ will level off energy demand by leveraging peak shaving controls made possible with lithium-ion battery systems in order to both further reduce costs and contribute to the environment.

Lithium-ion batteries have a much higher energy density than conventional lead-acid batteries, enabling them to store large quantities of energy while also featuring superior charging and discharging efficiency. The operation control functions that come with the Powerpack system make it possible to purchase energy at nighttime, when it is cheaper, and then release the stored energy during peak daytime hours, making for more level energy demand. The system autonomously performs peak shaving to reduce demand rates. In addition to its role in enabling a continued energy supply in emergencies, the Powerpack battery system can also serve as a dynamic energy storage system for supplies at any other time as well, thanks to its energy management functions.
The anticipated effects of implementing this system are outlined below.

Reducing energy costs
Energy demand reaches its highest point in summer (peak energy demand), so IIJ will reduce its demand rate by controlling the facility's peak energy demand during that season. This also makes it possible to purchase energy at nighttime at a lower energy rate than in the daytime, thereby reducing energy costs.
Contributions to "leveling energy demand" as required by the Energy Conservation Law, along with contributions to general environmental efforts
The Act on the Rational Use of Energy (Energy Conservation Law) requires designated business operators to make an effort to advance the leveling of energy demand as one measure for promoting demand-conscious energy management. Using dynamic battery systems mitigates fluctuations in energy demand.

IIJ has plans to expand the scenarios in which battery storage systems can be used as an energy source for data centers.

Implementing and stabilizing renewable energy sources (solar, etc.)
Combining these with battery systems to store excess energy when produced, and stabilizing fluctuations in output due to weather and other conditions
Promoting efforts toward distributed energy systems
Deploying multiple energy sources (utility, renewable, and battery) to bolster resistance to blackouts and other failures
Applying these to container data centers to achieve self-sufficiency in terms of both energy and information in regions where energy infrastructure and information processing infrastructure are lacking, as well as to bases for supplying energy and information in times of disaster
Reducing energy costs and maximizing profits by managing energy demand, selling energy, and similar measures
Preparing to respond to an expanding demand response market (a system in which energy consumers can receive compensation for energy saved by cooperating with consumer-side efforts to reduce demand when high demand puts pressure on energy supply). 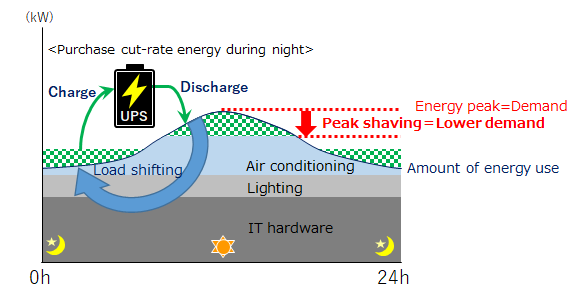 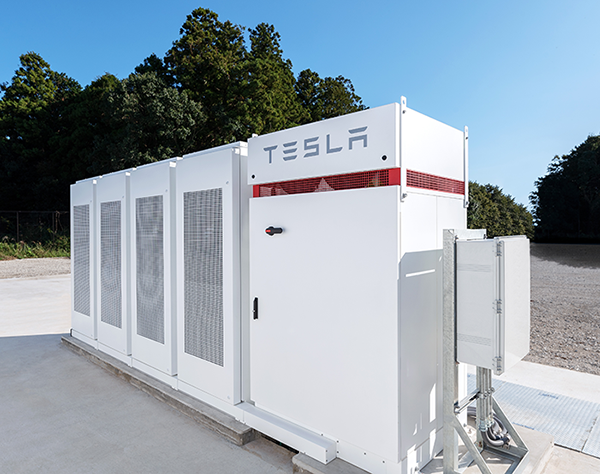